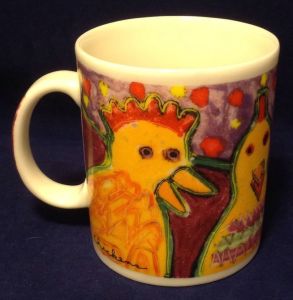 Found in Google Images, this is the actual mug which I still own (isn’t it wonderful?), that is featured in this poem.

Prompted to post it by Amy T., I dedicate it here to all of us who have looked back on our youths, shaken our heads,

Twenty years ago
I received a birthday gift
from a close college buddy-slash-sometime lover
(What on earth were we thinking?).
Back then, our past was already in the past
and twenty-four was already not young.
He gave me a coffee mug
covered in chickens––

three plump specimens posed around the outside,
and one that looks like an index finger
with an eye, a comb, a beak, and a wattle,
slapped onto the bottom.

How, I can’t fathom,
but my friend knew that those chickens
with their orange-red, expressionistic bodies
would be a boat-floater for me––
the one time I had slept with him
had been an epic shipwreck,

with a silent drive to the airport in its wake;
on the way, we choked down pancakes,
and I stifled sobs in my coffee,
averting my eyes
from the helpless horror in his.
I then flew off into the wild, wide sky,
bewildered, drowning.

Somehow, for years to come,
his southern gentlemanly charms
still served to allure:
he kept his promise to write
and took pains to catalogue for me
the details of his worldly escapades
and various, accompanying sexual conquests,
always making sure to emphasize
the ways in which they were hot for him,
so as to prove those trysts’ relative rightness.

Then, years later, for my birthday,
came the unexplainably gratifying
chicken cup.

My southern gent,
now so long ago flown from this callous coop,
wooed another and had his own brood,
as, in due course, did I,
but the mug, no worse for wear, remains
a spectacular feature––
like a bright birthday piñata
(with its promise of sweet reward) ––
of my sacred morning ritual.

These chickens,
still ecstatically surprised,
letting out unabashed, open-beaked caterwauls,
adorn my most aged and prized coffee mug;
a vessel, perfectly-sized,
it cups its contents so adoringly,
fiercely,
like an egg enveloping its cache of gold,
as I take privileged sips.

The big chicken on the left
might actually be a rooster

and that one on the bottom,
a middle finger.